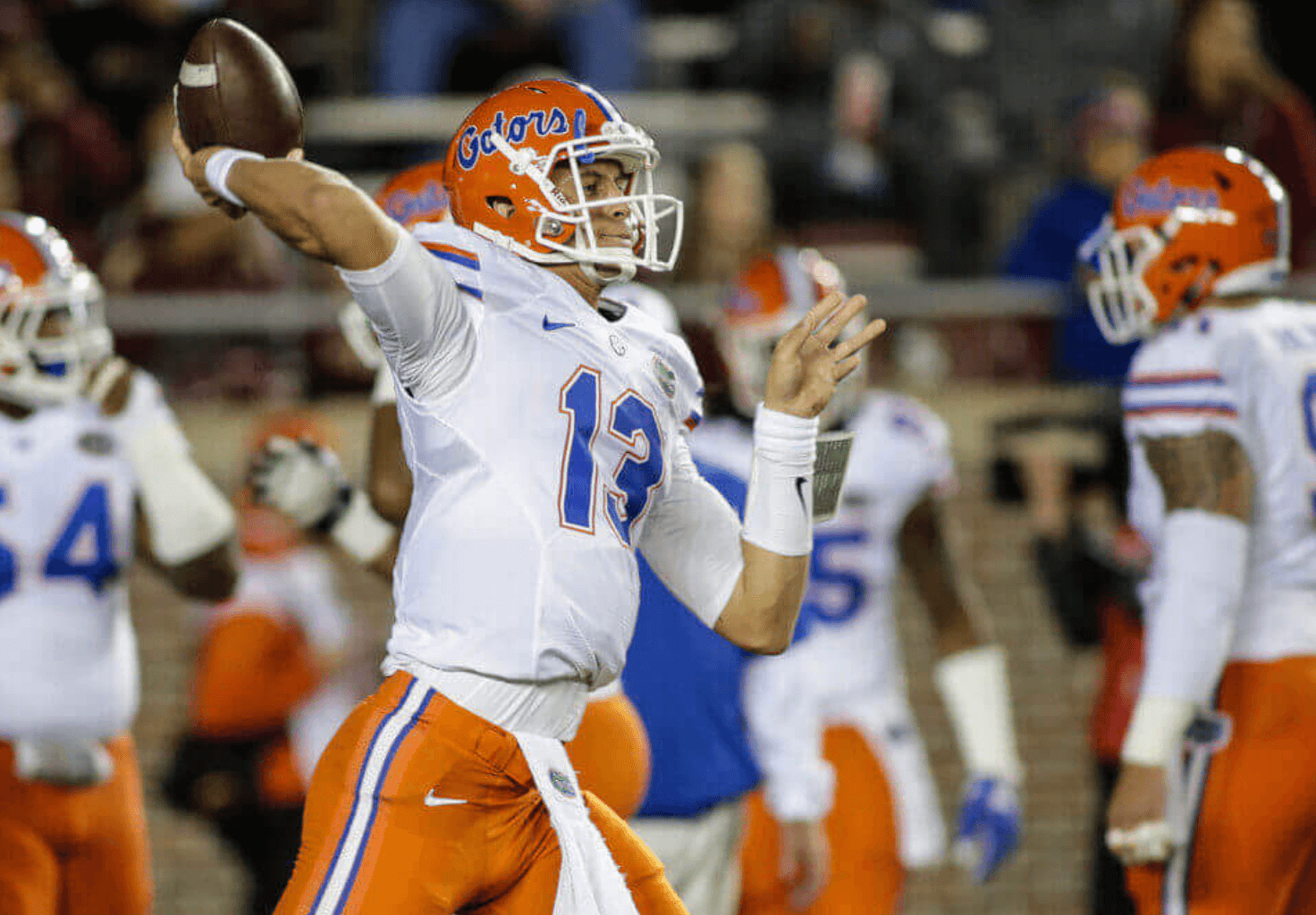 When Florida takes the field for summer practice, it’s a sure bet that the biggest spotlight will be on the quarterback battle. Of all the names in the mix, it seems as though the two top competitors are Feleipe Franks and Malik Zaire. And to help fans best prepare for the battle, I’ve decided to do a Film Room segment on each.

As the so-called “incumbent” from spring ball, I decided to study Franks first. Zaire will come next week.

The main knock on Franks, dating back to his high school days, was his decision making. Nobody would ever question that the kid had talent, but too often he’d follow up an amazing play with a decision that amazed you for the wrong reasons. And that was why he was redshirted last year instead of being thrown onto the field as the Gators chased a second straight SEC East championship.

Franks has grown leaps and bounds since then. Of course he still makes some mistakes- every quarterback does- but he showed in the spring game that he could thrive in the key situations in which he was once most apt to make some of those mistakes.

Here are three plays from that spring game where he formerly seemed most likely to do something awful, but instead made great decisions. 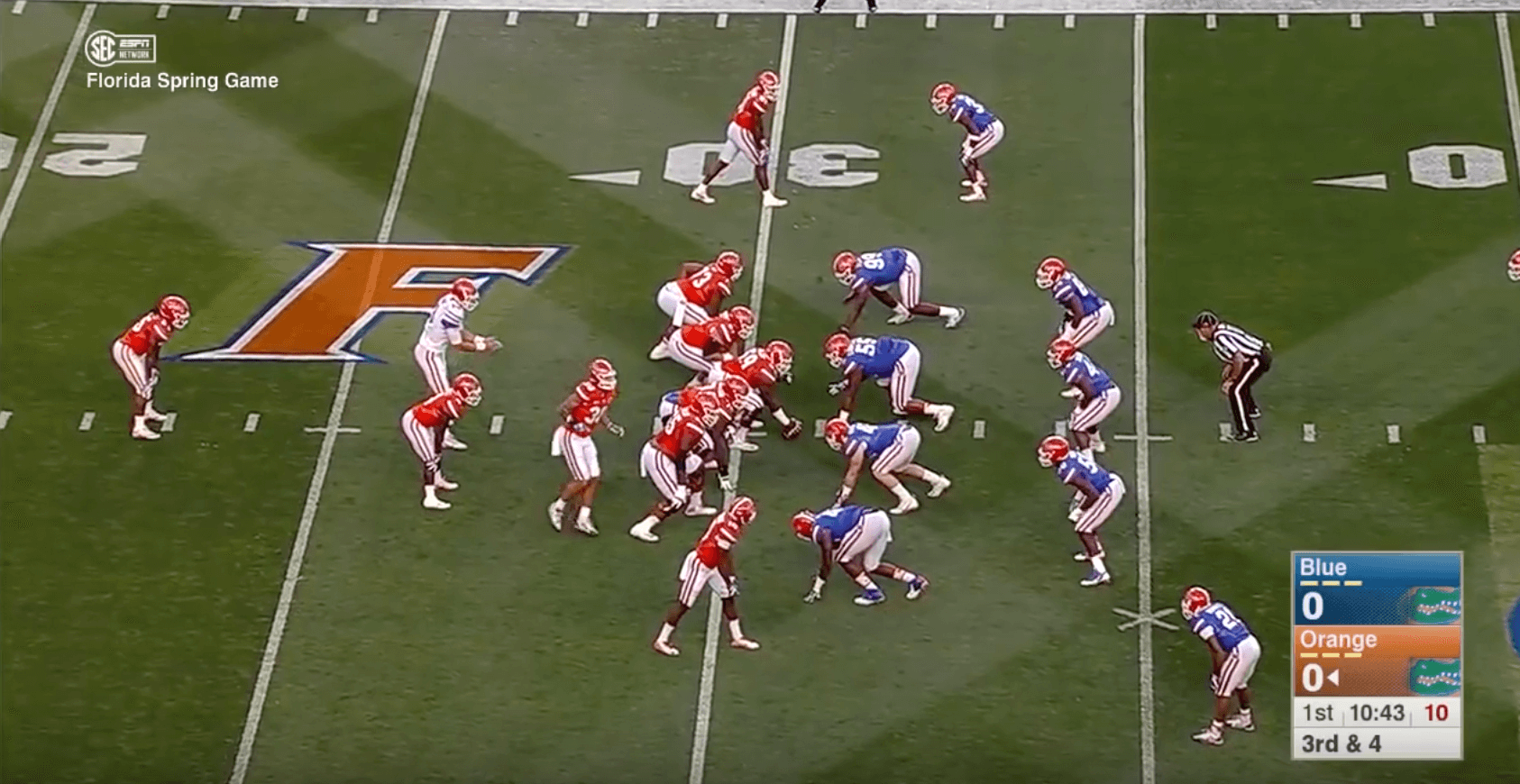 On this third and four and a half, all Franks has to do is gain five yards to move the chains and keep the drive alive. Sure, it’s always nice to throw one as far as you can down the sideline for a touchdown and hear the band play the fight song- but you don’t need that here. In the past, Franks likely would have looked deep first, and then tried to force one if it wasn’t there.

DeAndre Goolsby goes in motion, which seems to indicate that the play is headed right. 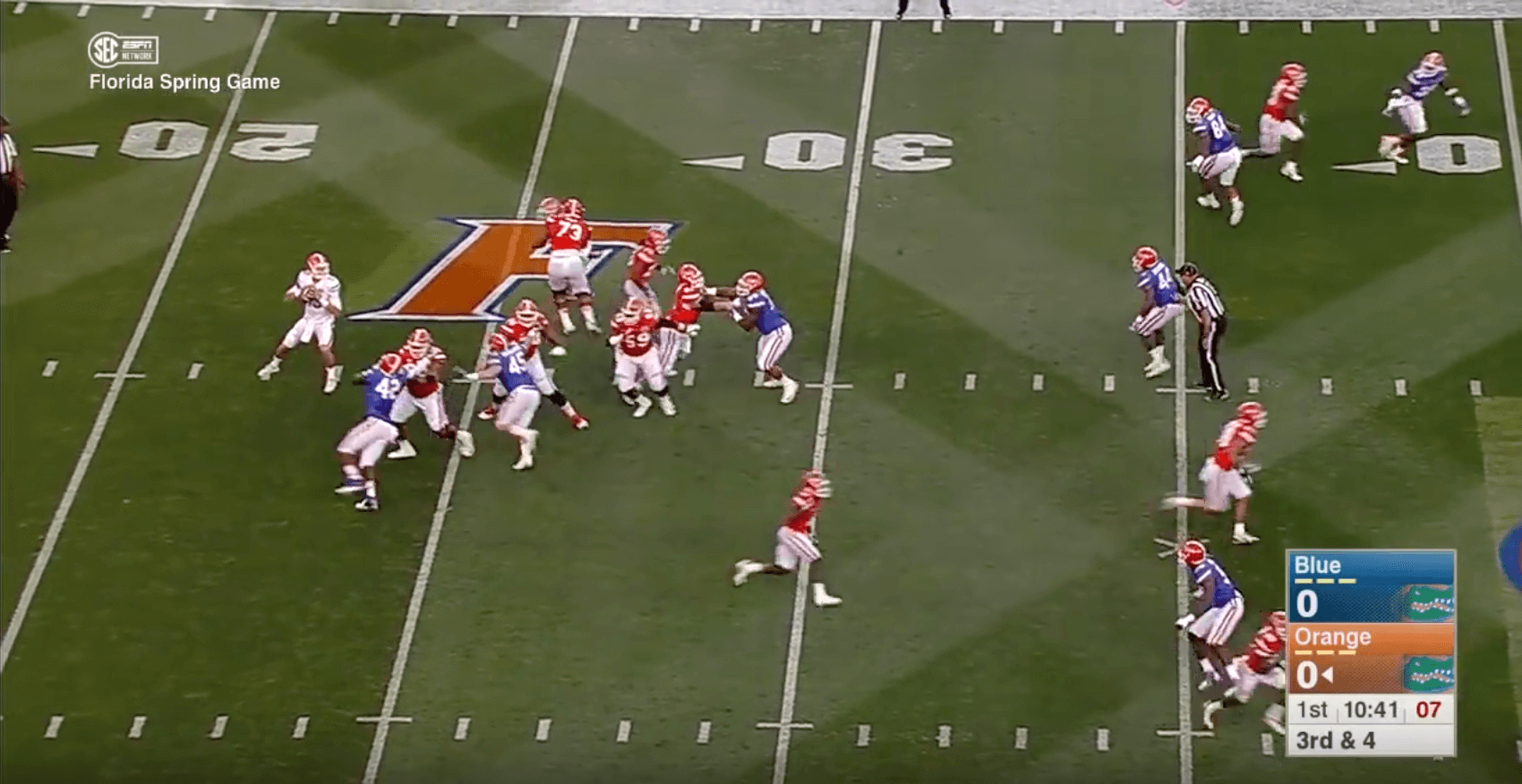 One second after the snap. Franks’ line has not done its job on this play and the pocket is immediately collapsing. But check out that orange blur on the 30 yard line named Brandon Powell. Franks is about to have an open receiver- a check down, perhaps, but an open receiver nonetheless and an escape hatch out of danger. He also has three other receivers running deeper patterns, all of whom are being accounted for by the defense. Who would he throw to? 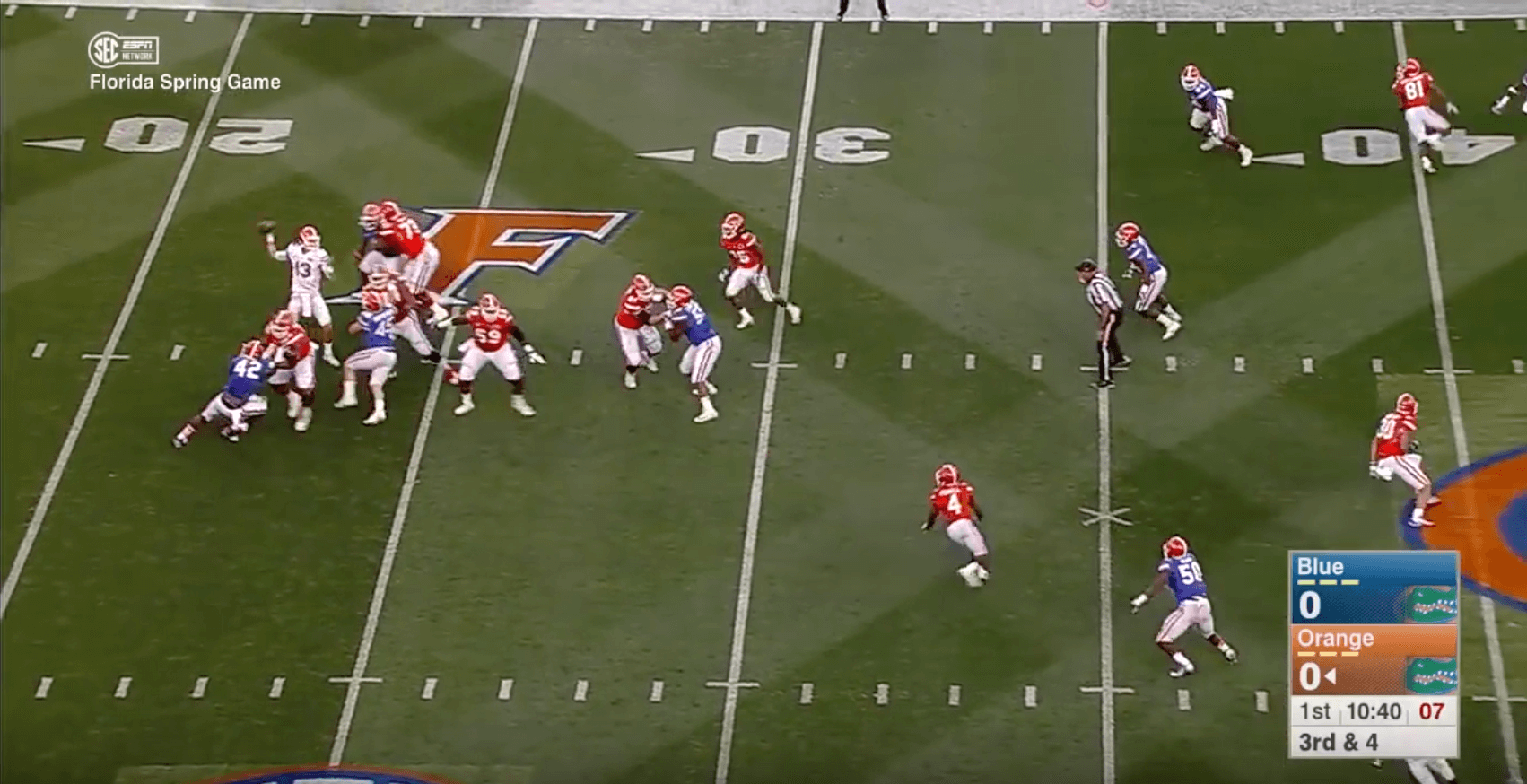 Two seconds after the snap. And the pocket has completely imploded. So Franks gets rid of the ball, firing a laser to Powell right at the sticks. All Powell has to do now is basically just fall forward to get the first down. 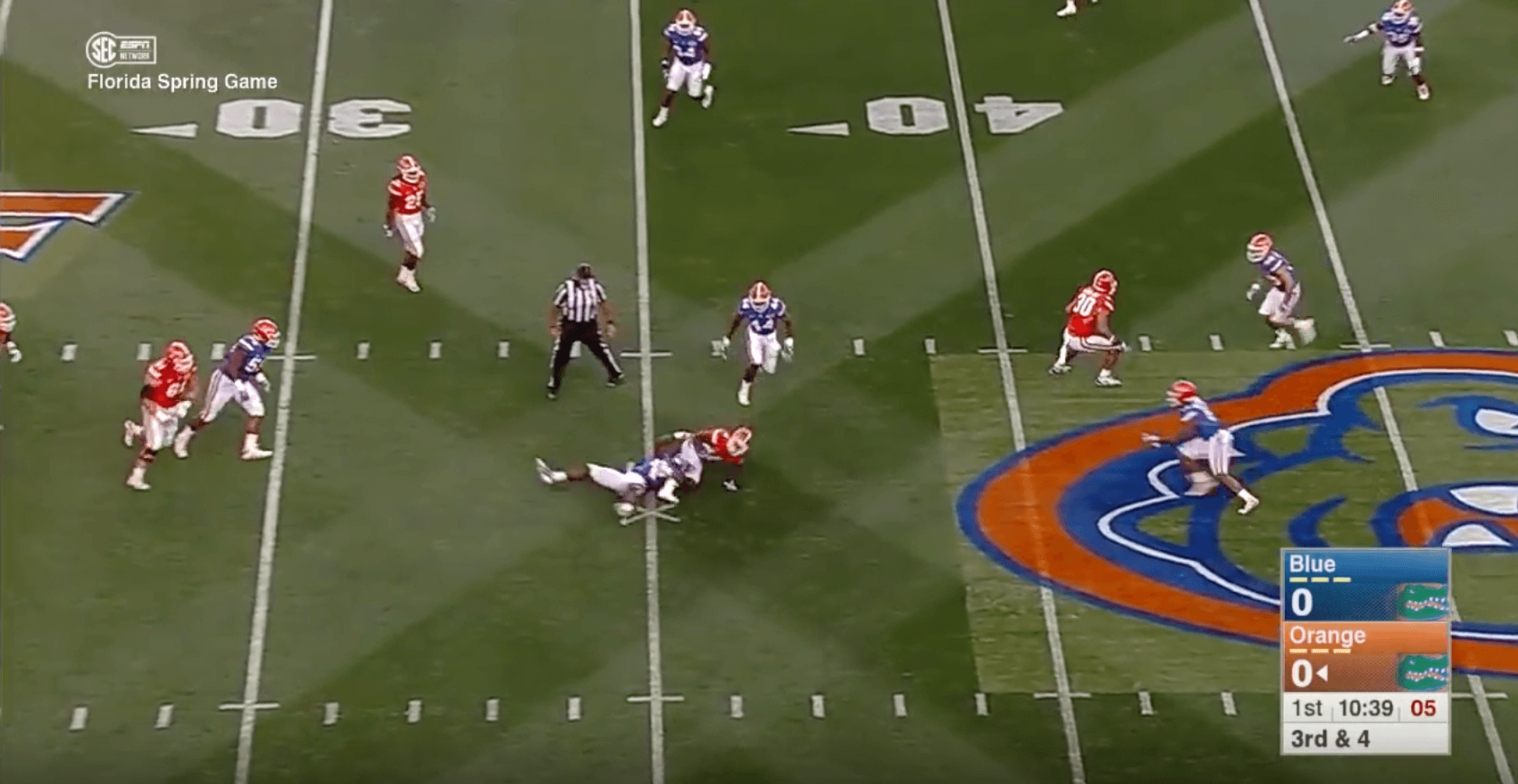 And he does. It goes down in the books as a simple six yard gain, but those look a hell of a lot better than interceptions do both in the books and on the field. All you can ask your QB to do is produce the biggest net positive result he can realistically on a given play, and sometimes that’s just six yards. It also allows the drive to continue, and give Franks the opportunity to run more plays.

The second such play I chose was the very next snap. Franks dutifully ate his vegetables, and now he gets his cake.

On the bottom of the screen, out of sight for now, is Josh Hammond. With Jordan Scarlett in the backfield and Goolsby behind the line appearing ready to block, it looks like the running play the defense is expecting with seven guys on or within two yards of the line of scrimmage. 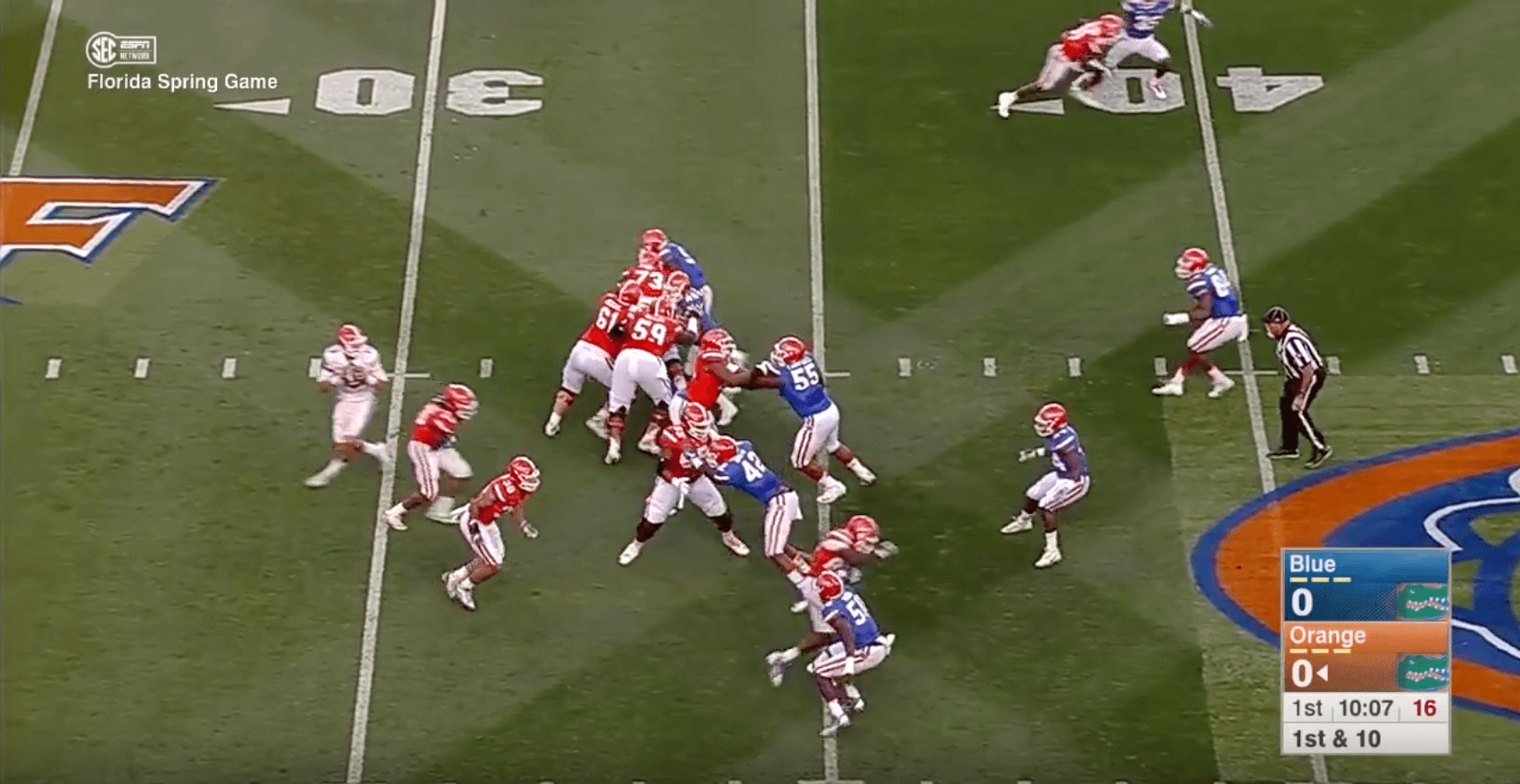 One second after the snap. Franks is dropping back to throw, which the defense seemingly didn’t prepare for. He’s got his eye on Hammond the whole way- not something you want to do too often, but actually the perfect thing to do in this case. 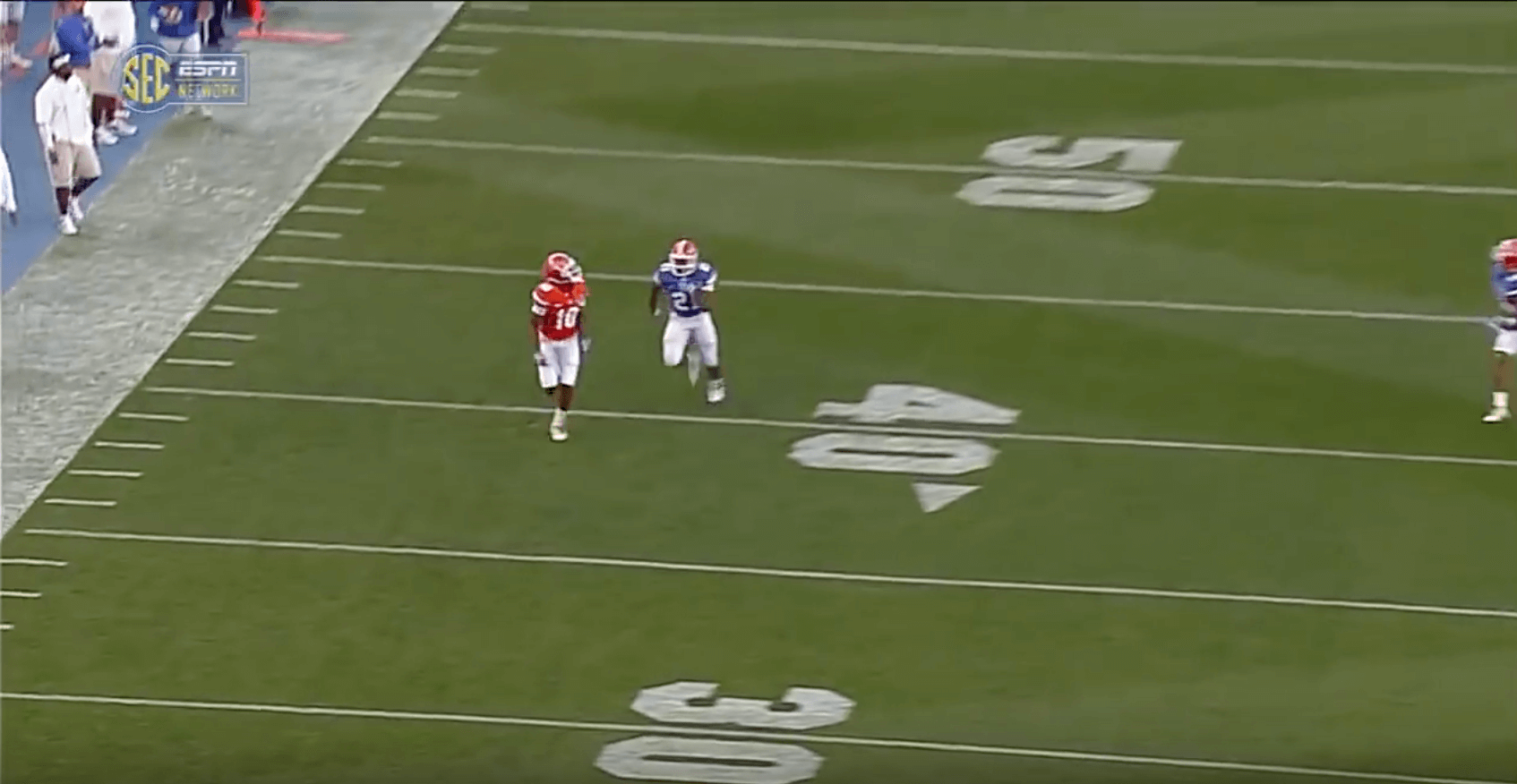 Two seconds after the snap. Throwing to the first open guy he sees is the right move here, because he’s got his defender beat. If you see somebody open deep, you don’t ponder it- you get him the football. 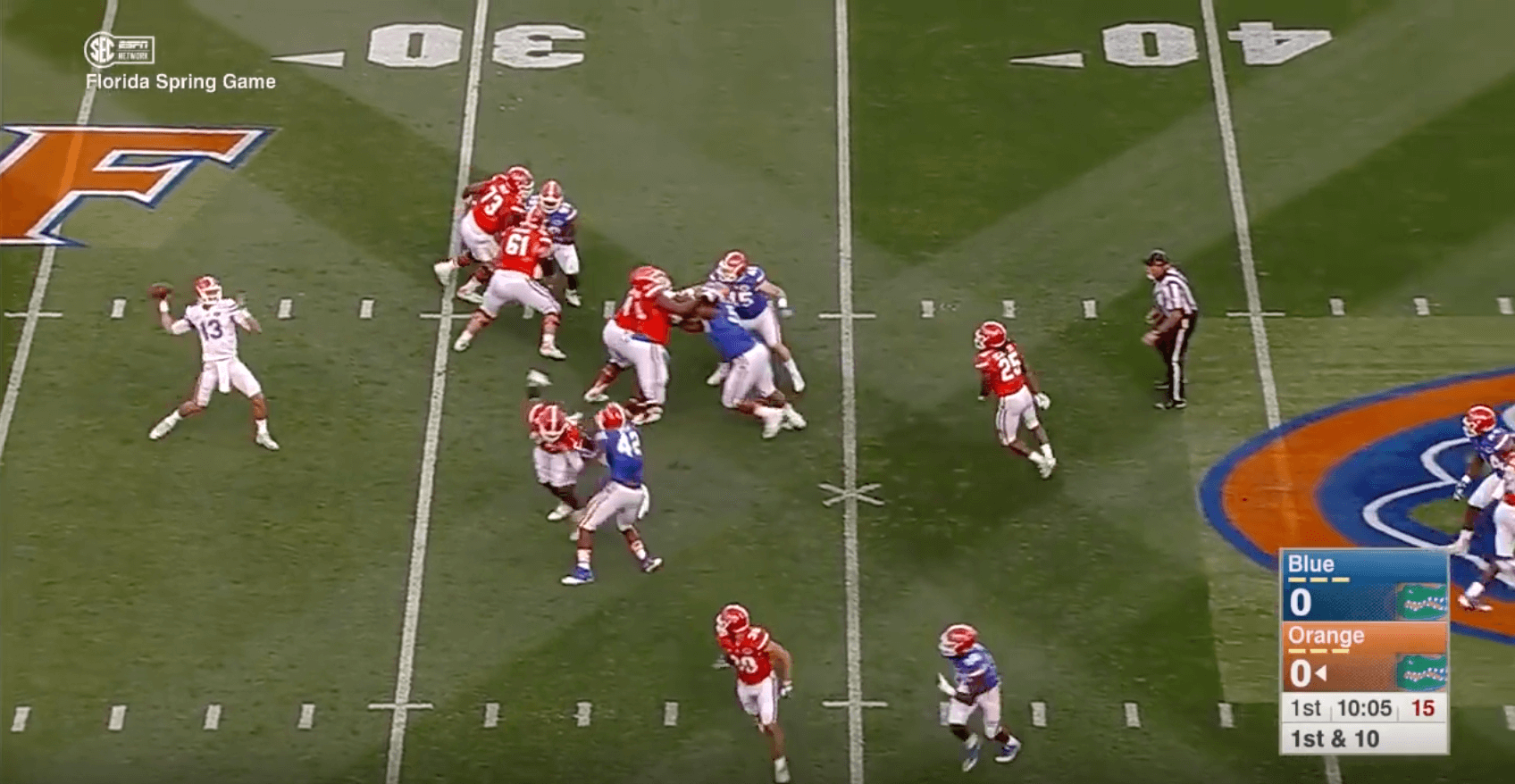 Which, three seconds after the snap, is exactly what Franks decides to do. 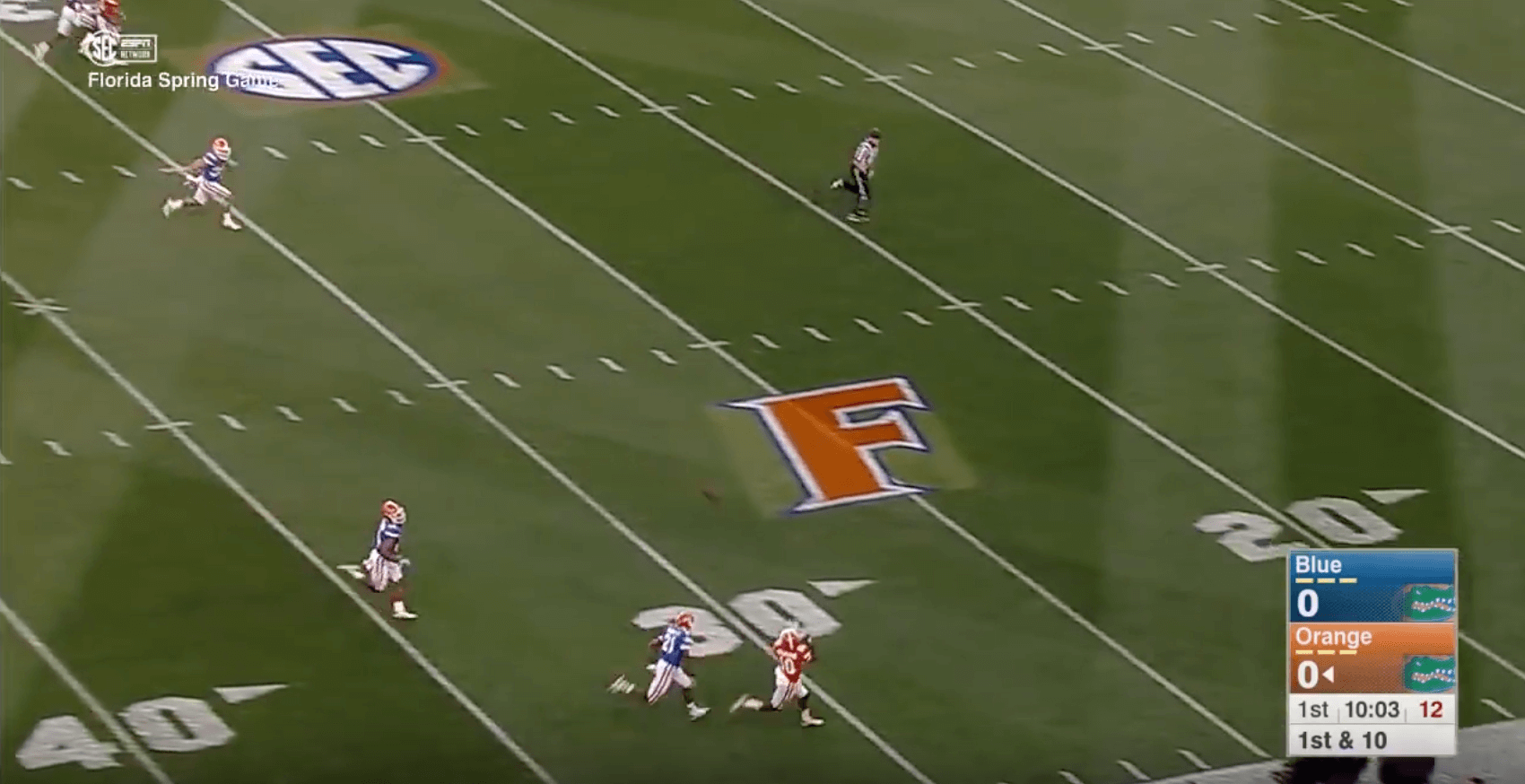 Now that Franks has made his decision, there’s the matter of actually getting Hammond the football. Franks does so nicely by lobbing a rainbow over the defender and right into Hammond’s arms.

Hammond actually has a touchdown here is he plays his angle right. He doesn’t, goes to the sideline too fast and winds up getting pushed out of bounds at the 18 yard line. Nevertheless, it’s a picture-perfect throw from Franks and a nice job by Hammond the whole way.

In a real game, there would be a meaningful score attached to the situation. As it is, it’s a critical third down for Franks and the Orange team in the red zone. 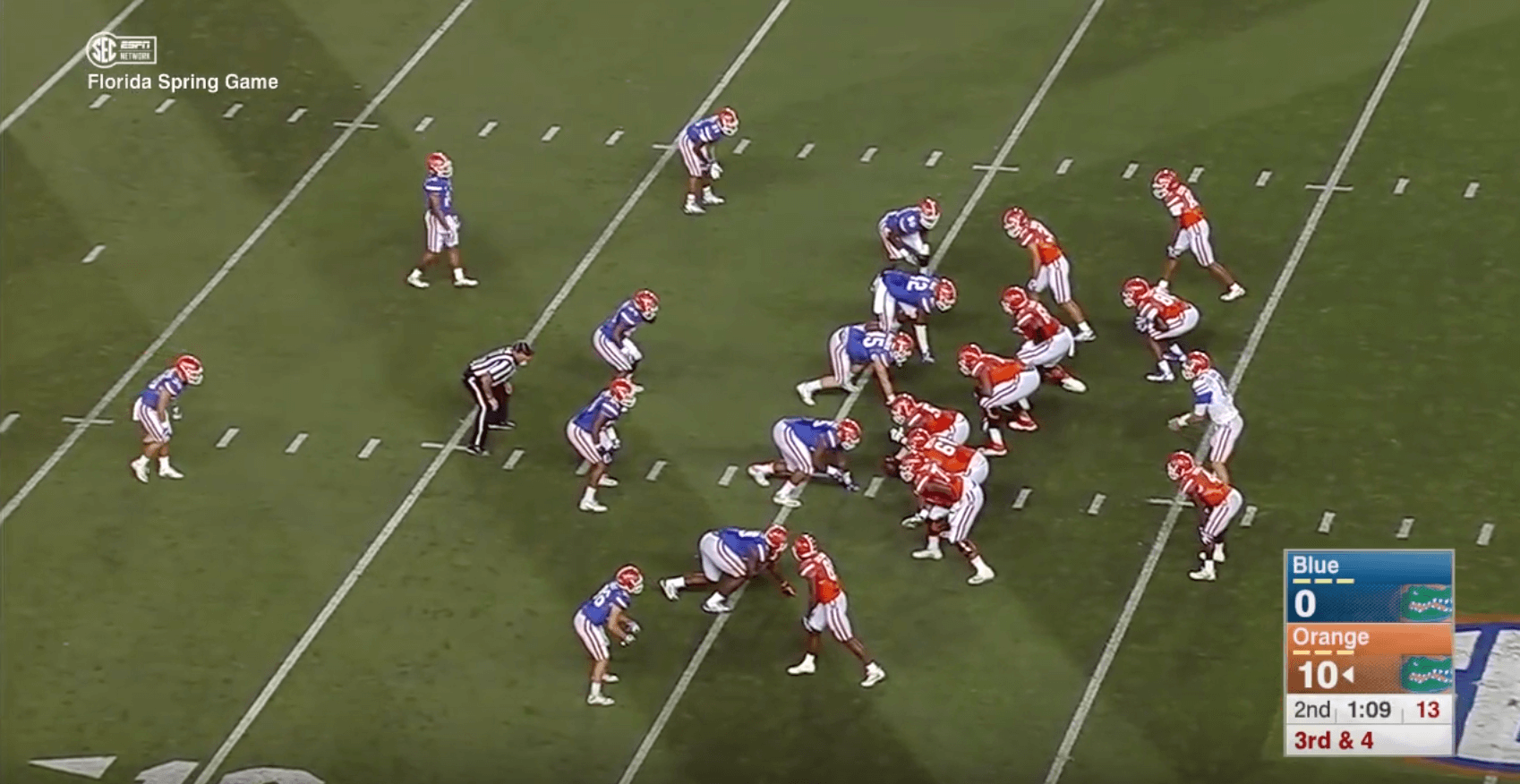 Franks being in the shotgun almost gives it away that he’s going to throw. No matter. He’s going to have plenty of weapons to choose from. Question is, will he choose the right one? 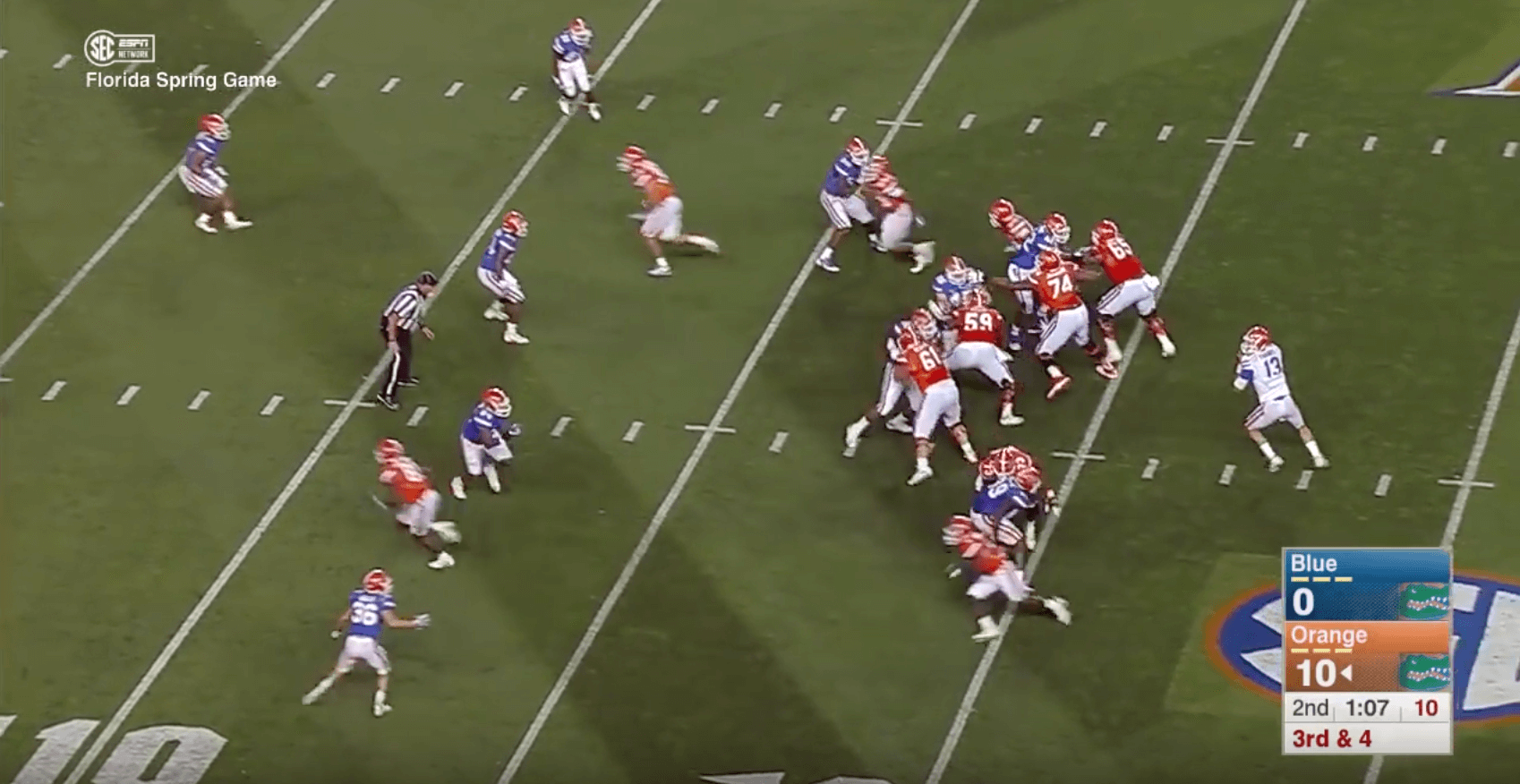 One second after the snap. Franks showed in spring practices that he knew how to go through his progressions, so he prepares to do it here. But he notices almost immediately that Antonio Callaway has found a huge hole in the coverage. 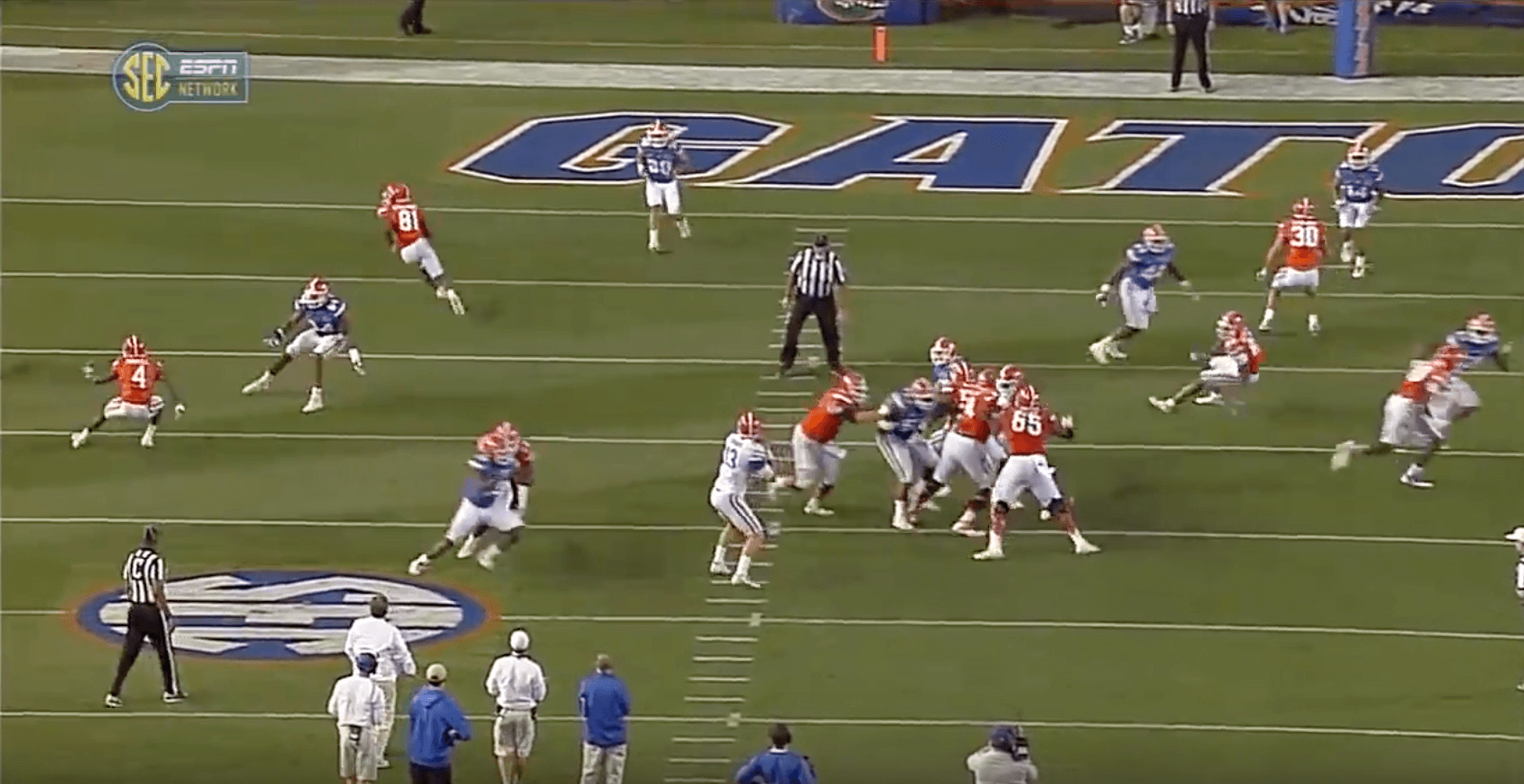 Two seconds after the snap. No sooner has Callaway made his cut than Franks noticed how wide open he was about to be, and began the mechanical process of throwing the football. No waiting or second guessing here. Franks has found an open target and he’s letting it go. 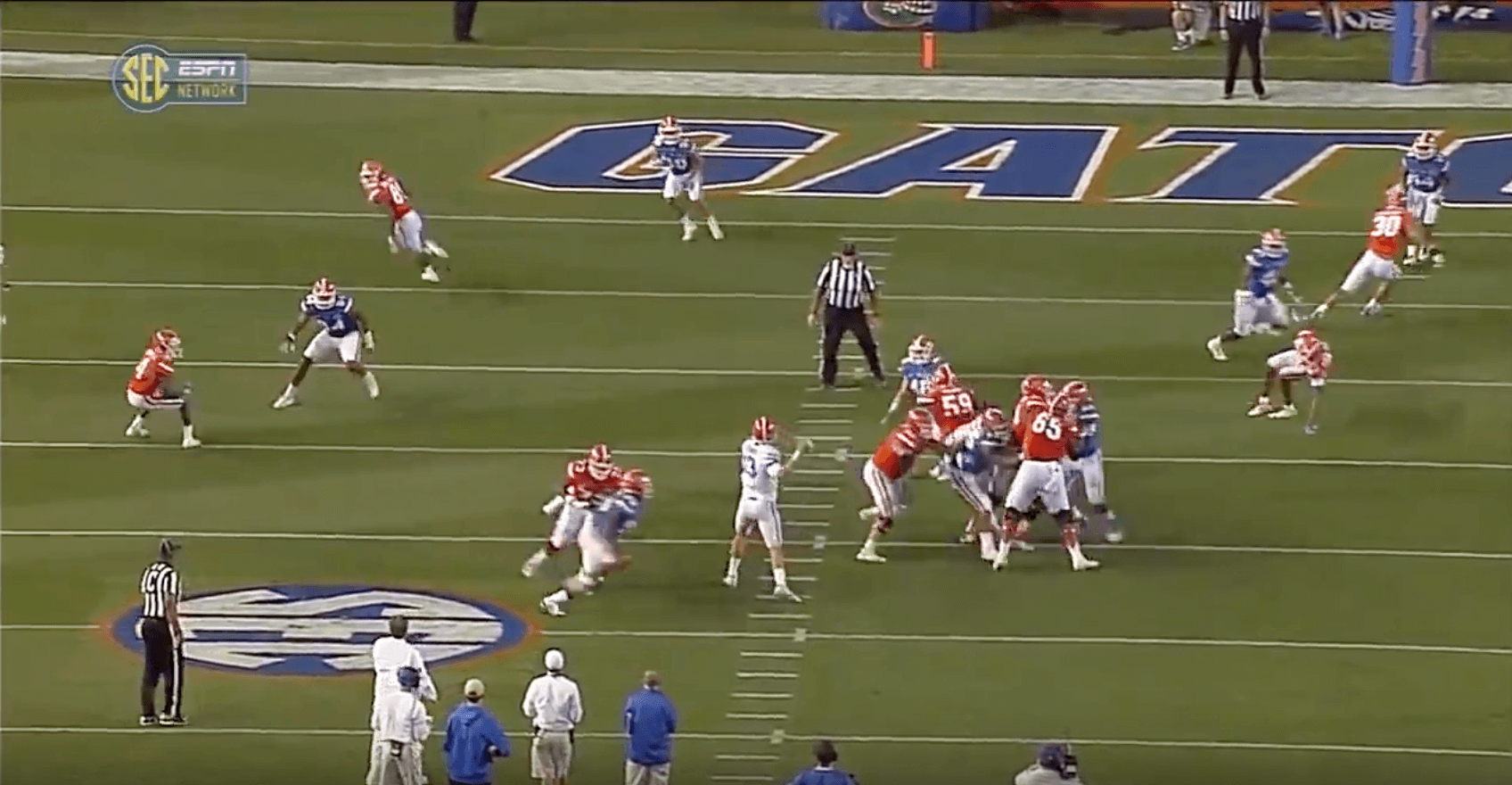 Sure enough, Callaway’s wide open. And Franks is about a tenth of a second away from releasing the football toward him. The defense has realized that it’s messed up, and quickly tries to close the window- but it’s too late. 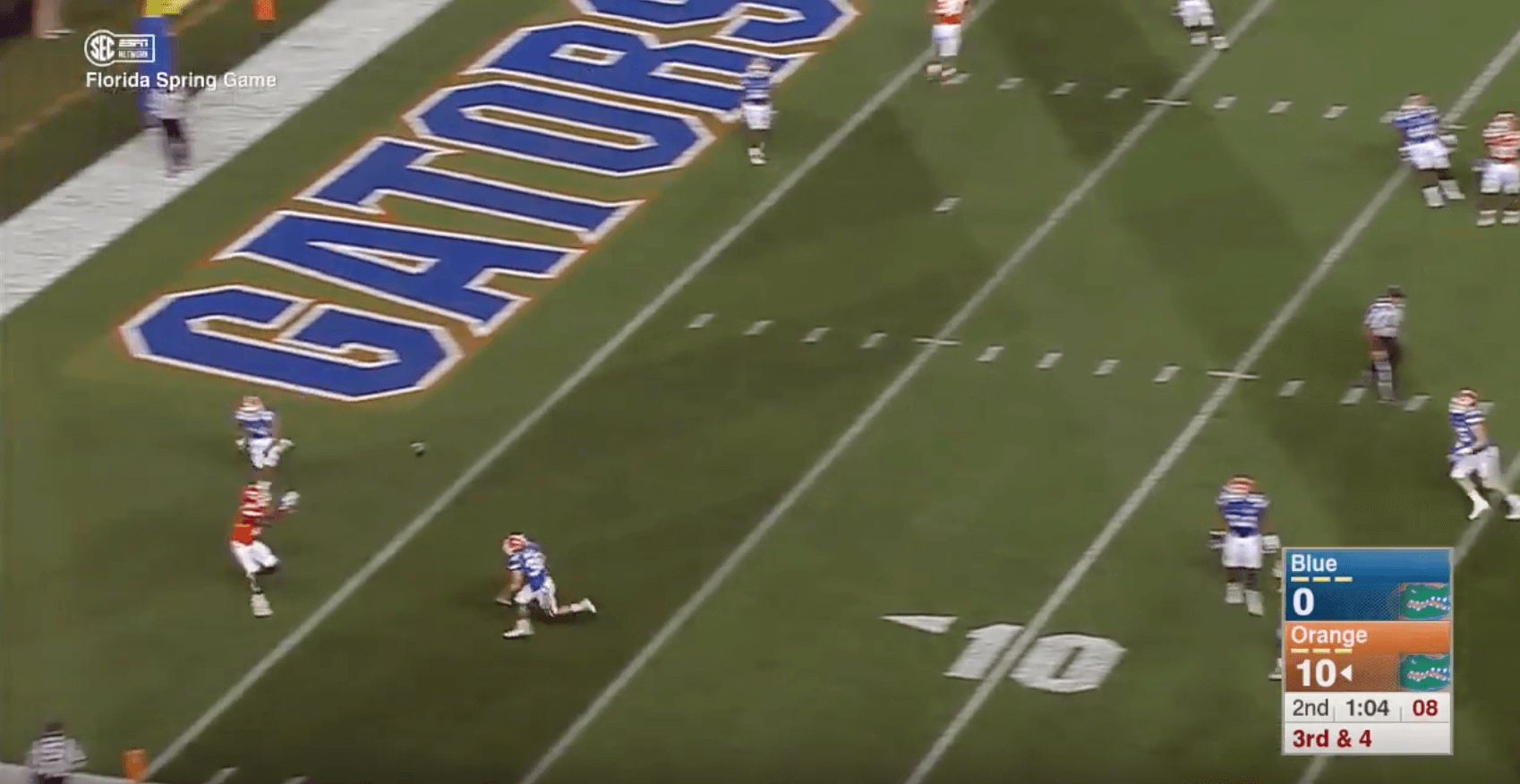 Of course, the spring game can’t simulate real live game action. Opposing defenses will be better and more apt to not let Callaway burn them like this. Doesn’t matter. Franks identified a coverage bust almost a second before it happened, and delivered the ball in the one second window in which he was open.

Part of making good decisions is knowing when not to force the ball, yes, but another part of it is trusting what you see and not hesitating to make something happen in the split second in which you can. The key for Franks will be proving that he can do all this on a consistent basis, but proving that he’s able to do it, period, is a step in the right direction.