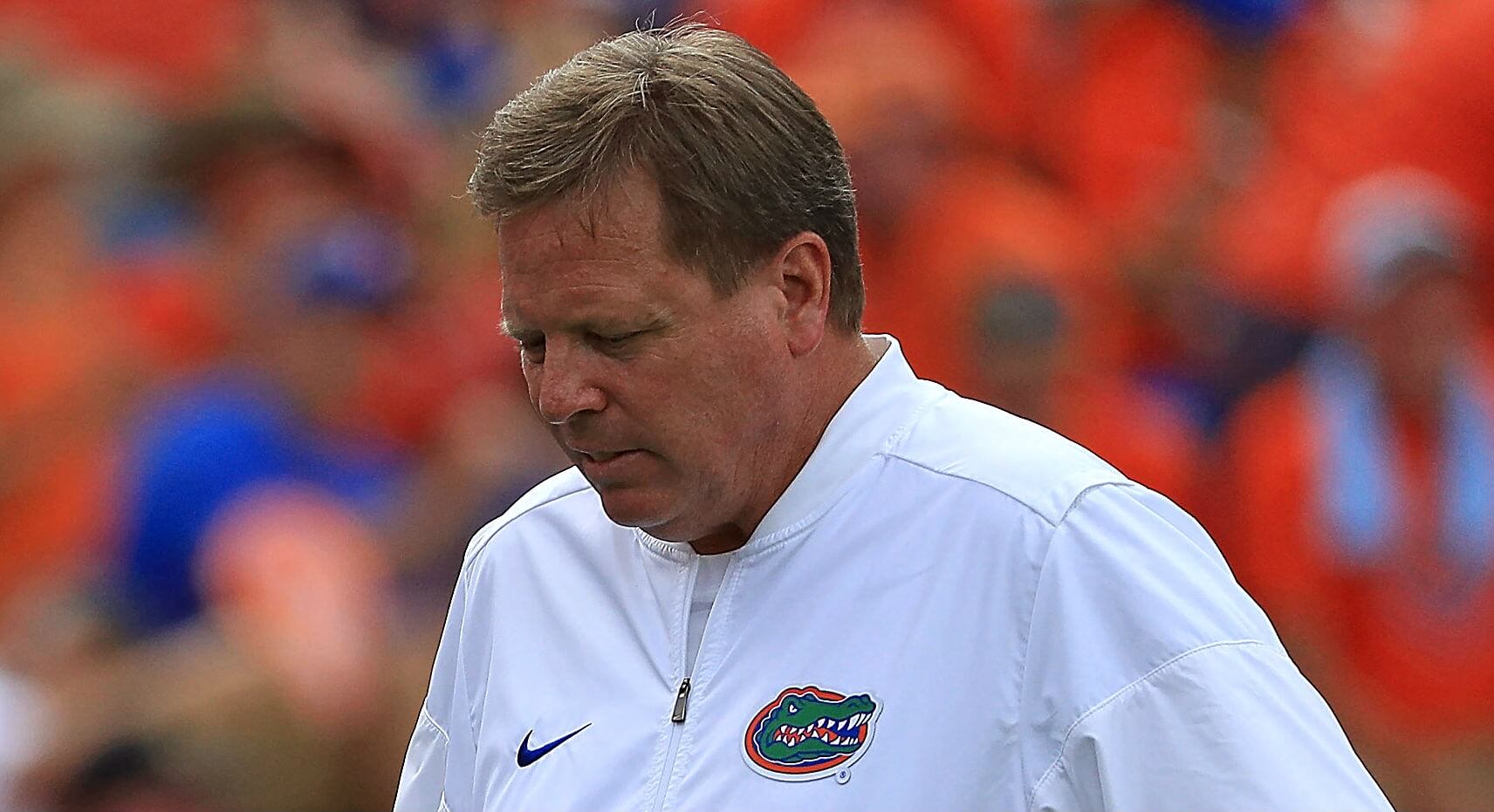 For months now, suspicions have grown about the strength and conditioning program Jim McElwain oversaw in Gainesville. Today, those concerns developed some credence.

According to a report from Sports Illustrated’s Andy Staples, McElwain had the ultimate problem: the players didn’t respect him and his plan to get them in shape. Staples writes:

McElwain talked about having a similar organizational structure to Saban’s, but he didn’t [inherit] Saban’s attention to detail. During McElwain’s final year at Florida, some Gators were paying their own way to be trained elsewhere in Gainesville by former Olympian Tim Montgomery. That should have been a glaring red flag with regard to the Gators’ strength program, but nothing was done to correct the issues that caused the players to seek help outside the program.

I know what you’re thinking, but you can post/tweet/rant your frustration at this later (I totally believe this without a moment’s hesitation both because of Staples’ outstanding reputation as a journalist and… well, I watched the 2017 Gator football season). Meanwhile, I actually see this as a positive thing, as now there’s some real legs behind one of the theories that led to the derailment of 2017.

But there’s no sugar coating it: that is a horrifying development. I know it’s fashionable to just pile on the coach who’s just been fired for incompetence, but by no objective measure is that acceptable. As the head coach of a football team, you are tasked with many different jobs, not the least of which is to ensure that your team collectively does everything it can to be ready to put forth its best effort on game day. Granted, a former Olympic athlete probably isn’t the worst guy you could turn to to help you get in shape, but you shouldn’t have to go to one because the best guy to turn to to help you get in shape is supposed to work for the football program you play for. If it’s true- and again, it’s not a stretch to think that it is- it reflects just as bad if not even worse on McElwain than anything he’d previously done (or not done) at Florida, up to and including him painting the fan base as bloodthirsty lunatics who clamor for heads on poles at the first sign of trouble.

It isn’t worth harping on this for too much longer, because he’s gone, I do wish him well moving forward and because it already happened and it’s over. But just because this is something that first publicly came to light after it happened doesn’t mean it can’t get the initial reaction of shock it deserves and would get if this development broke as it was happening live. And because it is a solid explanation for some of the more embarrassing moments the last few years, it’s important that we know about it for closure.

Put simply, Florida quit in several games during McElwain’s tenure. The Gators never even bothered to show up for the 2016 Citrus Bowl against Michigan, a 41-7 loss. An early 7-0 lead over Alabama turned on its head and ended up as a 54-16 humiliation in the 2016 SEC Championship. Georgia hung a 42-7 beating on Florida this season, their most lopsided victory over the Gators since 1982. And the week after McElwain was fired, Florida showed no interest in playing football and allowed a 6-6 Missouri team to drop a 45-16 blowout on them.

McElwain’s time at Florida was highlighted by back to back East division titles and thus, becoming the first coach to ever take his team to the SEC Title Game in each of his first two years. But 0-2 records against perennial national heavyweights Alabama, FSU and Michigan- the closest of which was a 29-15 loss to Alabama in the 2015 SEC Title Game- proved just how far away the program was from being at the level it’s expected to be at. That, for lack of a better way to put it, is a problem, one that can be fixed with recruiting and conditioning.

And Dan Mullen is taking steps to fix that problem via both those methods. On the recruiting end, Mullen has already hauled in dual threat QB Emory Jones, landed Ohio State transfer Emory Jones, and won a battle with Alabama for Trey Dean’s services. To fix the conditioning problem, he brought along his former strength coach, the aptly named Nick Savage, from Mississippi State to improve the Gators’ conditioning. He also sent a warning that hopefully reverberated through the locker room the day he was hired: “rest up this December, because you’re about to go through the toughest offseason of your lives.” Given the results he had at Mississippi State, there’s reason to believe those words will soon become reality for Florida’s football team.