Uncategorized After review, the ruling stands: Brandon Bluhm’s blown call in WCWS was the worst I’ve ever seen 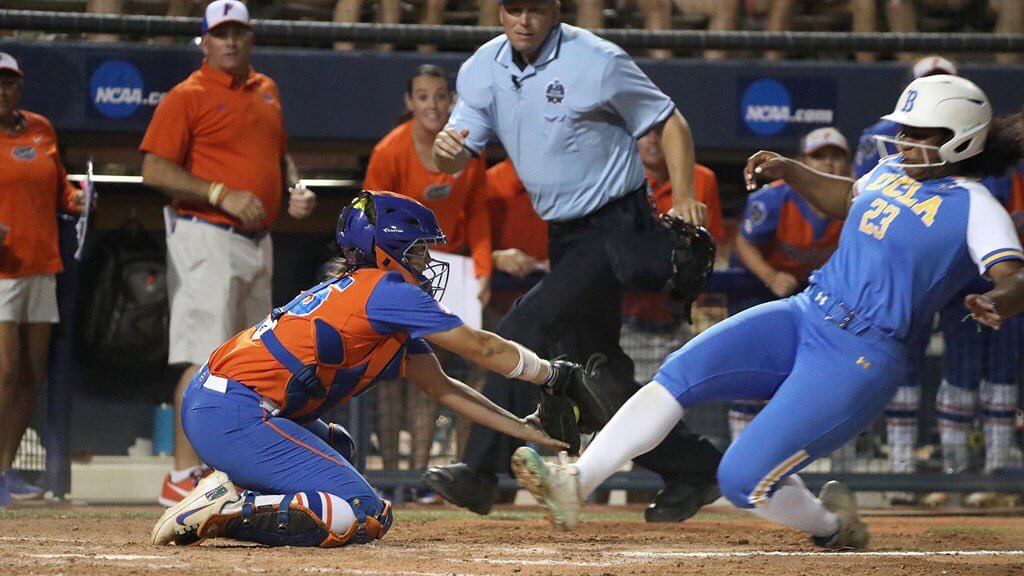 I wanted to take a few days to think diligently before making a statement that could potentially seem hyperbolic, grandiose and reek of recentism. After four long days of brain racking, I was able to come to a simple conclusion that won’t do much to change anything, but deserves to be told as a part of the story.

To be blunt: the call of “safe” from home plate umpire Brandon Bluhm on a UCLA runner at the Women’s College World Series was the worst, most egregiously blown call I’ve ever seen. Worse than the Dallas Baker phantom slap against Tennessee in 2004. Worse than the non travel call against South Carolina in the 2017 Elite Eight, which for me had previously held that distinction. Worse than whatever else you want to pit against it.

By now, enough time has elapsed that we’ve all not only all seen the play, but have done our best to forget about it because its memory is as likely as not to drive us insane. I want us to be on the same page, though, so here we go again. Florida led 4-1, but UCLA had loaded the bases with one out in the fourth. A short fly ball pulled shortstop Sophia Reynoso down the left field line, where she made the catch and then fired home to try to nail the runner. Which she did, a fact agreed upon by everybody watching… except Brandon Bluhm.

The gift was compounded by the fact that softball doesn’t have instant replay at the WCWS, an error that’s ignorant and foolish at best and downright sexist at worst given its presence and prevalent use in college baseball’s World Series. Without replay available to overturn the horrendous blown call, it stood- and then the game deviated into an alternate reality, setting off a chain of events that would have never happened had the right call been made.

There should have been three outs, but instead, the next batter, Taylor Pack, swatted a three run homer to put UCLA up 5-4. UCLA would win, 6-5, even though four of its runs came after a correctly called play at the plate would have resulted in the third out that would have ended the inning without the sliding runner and three additional runs Pack brought in scoring.

That put Florida in the loser’s bracket, where the Gators got shut out by Oklahoma to end their season. But Florida should never have been in that game. They should have been placed into the semifinals against FSU, but instead it was UCLA who got that honor- and promptly blew it, losing twice to the Noles. The tangent the blown call threw the entire tournament off onto was capped by FSU winning its first ever national championship.

The mature thing to do after your team is clearly wronged like Florida is to forget about it, acknowledge that all officials blow calls and everybody gets screwed over at some point. I also have absolutely no problem admitting when a team is better than mine, and beats Florida on the field. That’s sports. Someone has to win and someone has to lose. If the other team beats mine fair and square with no help from the officials, cap tip to them, and they deserve it. And sure: Kelly Barnhill left a pitch up in the zone for Taylor Pack, not Bluhm. Nor was Bluhm to blame for Florida’s bats going silent against the Sooners, a game that last year’s WCWS Finals should have motivated the Gators to play by itself.

But none of that changes the fact that Bluhm made the single worst call I’ve ever witnessed, and that the Gators’ downfall began after it. And for Florida to put together such a special season just to have one incompetent official and the NCAA’s failure to apply instant replay to the WCWS wreck it all is wrong. We’re well past the point of demanding that the NCAA should fire Brandon Bluhm and use replay, because their track record of ineptitude in varying aspects of governing college athletics suggests they’ll do neither. The overlying incompetence of the NCAA is nothing new, really, and so it should not incite too much anger when it negatively impacts Florida. For years now, my mantra has been for the Gators to play every game as if the refs are being paid off by the opposing team and thus not give them a reason to make bad calls against Florida and take them out of the equation. Whether they are being paid off or not isn’t the point; the idea is to so thoroughly dominate the other team that there’s absolutely no chance the game gets to a point where one bad call decides it.

Unfortunate, Florida’s inability to do so against the Bruins cost them their season.

2 thoughts on “After review, the ruling stands: Brandon Bluhm’s blown call in WCWS was the worst I’ve ever seen”