Gator Football Football Game Recaps Above all else, play-calling dooms Gators against Michigan 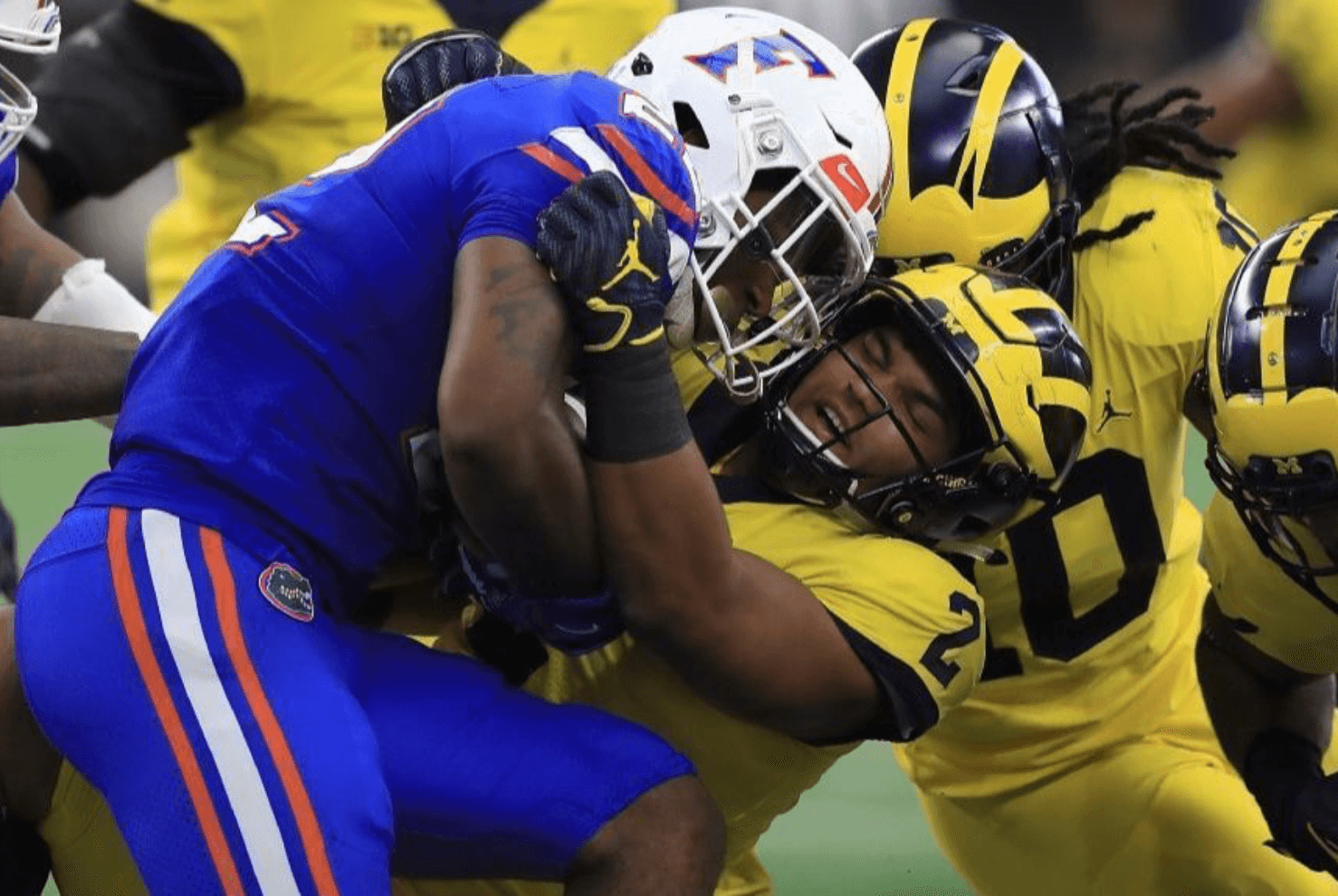 As Michigan’s Noah Furbush pounced on Malik Zaire’s fumble in the end zone, the second installment of Jim McElwain vs. Jim Harbaugh suddenly earned the distinction it deserved: another lopsided final score, one that dovetailed nicely with how the game played out.

Do not for a second be fooled by the fact that Michigan was only up single digits with two minutes to go, or that Florida actually had the lead at points in the game. This was not a closely contested game, and it was only thanks to a pair of pick sixes that the scoreboard created the illusion of one. Rather, Saturday provided us with a nauseating flashback to the Steve Addazio era, where Florida relied on its defense and special teams to score, and if they didn’t, the Gators would lose.

And on Saturday, they lost anyway. The offense was that bad.

There are a number of possible, and even valid, arguments to make for why. Florida’s offensive line was abused. The Gators were down two key starters. Michigan defensive coordinator Don Brown called a near perfect game. Florida was breaking in a new quarterback, and then pulled him early in the second half after he made his first mistake.

But those are all secondary effects of the primary problem. Florida offensive coordinator Doug Nussmeier was badly outcoached, and his play-calling was too predictable and conservative.

The best attribute Nuss appears to have as a play-caller is that he is one of the most creative and unpredictable when given time to prepare. Thus, the first drive of a given game under Nussmeier is usually extremely effective, as he’s had six days to script, edit and perfect it, with a few options here or there for different levels of success on the first few plays. Even the best defenses are often fooled by them. The last three teams to beat Florida- FSU and Alabama last year, and now Michigan- were all similarly stunned when the Gator offense went flying right down the field on the first drive of the game. Objectively speaking, driving into the red zone against such stout defenses- and against the best of them all (Alabama) scoring a touchdown- is an extremely impressive feat. It’s even worth some applause.

But the clapping stops when defenses adjust and force Nussmeier to improvise. After the first drive or two of a given game, you are no longer going by a script as a play-caller. Instead, you are forced to adjust to the defense’s adjustments and call plays on the fly, with maybe five or ten minutes to script a drive as opposed to six days, and many more different options necessary pending the result of each play and how the defense adjusts to them. And when forced to call plays on the fly, Nussmeier often looks helpless.

But never more so than Saturday.

The Gators finished with 192 yards of total offense against Michigan, which looks bad on first glance, but even worse upon taking a deeper look. 39 of them came on the final drive of the game with the backups in and the outcome a foregone conclusion. 46 more came on the pre-crafted opening drive. That leaves Florida with just 107 yards of offense on its other ten drives, a statistic that sits among the most embarrassing in Gator football history. Oh, it’s not as bad as giving up 641 yards to Alabama or losing to a Georgia Southern team that didn’t complete a pass under Will Muschamp, or even gaining 26 yards through three quarters against Miami Ohio in 2010 under Addazio’s stewardship. But it’s pretty damn close.

And the fact that it came in Nussmeier’s third season is profoundly troubling. I gave him a pass in his first year when the quarterback options were Treon Harris or Joshua Grady (and I still think Grady deserved a shot, but spilled milk at this point) and I gave him a pass last year when the choices were an ever so slightly more appealing tandem of Luke Del Rio and Austin Appleby. The reasons behind those passes? The success he had with Will Grier running the show early in 2015, and the promise that once Florida got its franchise QB, the play-calling would improve tremendously.

Yet with Feleipe Franks, who certainly appears to have the tools to be that franchise quarterback, the play-calling was the worst it’s ever been. And Nuss doesn’t monopolize the blame here, because Florida’s offensive line was manhandled, and the Gators were without their two most proven starting skill position players. But there are ways to game plan around the former, with jet sweeps, screens, and other play-calls that don’t make the clearly overwhelmed offensive line have to do as much, and Nuss can’t be blamed for the latter.

Making matters worse is that Florida (probably McElwain and Nussmeier together) elected to throw a redshirt over Franks last year so he could learn, develop and grow rather than give him a chance when Florida’s offense was struggling. The redshirt was supposed to delay and thus better equip him for the start of his Gator career. So now, as an objective and reasonable fan of Florida football, it’s one hundred percent fair to ask, somewhat rhetorically but not totally: Florida coaches gave him the redshirt for this? For him to be victimized by repetitive and predictable play-calling that Michigan was almost robotically prepared for?

The ultimate irony from Saturday is that the Gators lost the game in the plays following one big play that could have put Michigan in an insurmountable hole. Up 17-10, Moral Stephens blocked a punt to give Florida the ball in Wolverine territory. Did Nussmeier capitalize on the momentum and the gift of fantastic field position? Did he elect to take a shot at the end zone to see if he could catch the reeling Wolverines off guard? No, he called a dive to LaMical Perine that Michigan’s loaded front stuffed for a one yard gain, a flare to Brandon Powell that picked up seven, and then another dive to Perine that Michigan stuffed for a loss. Eddy Pineiro then missed the ensuing 47 yard field goal, and the Gators would not only not score again, but they would not even take another snap in Michigan territory.

So in the aftermath of this loss, I’m left with three main thoughts about Nussmeier, none of which are particularly settling.

One, Nussmeier had not just a whole week, but an entire offseason to study Michigan and Don Brown on film to prepare for their tendencies and possible adjustments to what other offenses similar to his own would do in the event that it had some early success. The result of all that preparation was under 200 yards of total offense, one scoring drive and zero touchdowns.

Two, Nussmeier has shown flashes of being a great play-caller, but many of those flashes were with Will Grier, who of course now plays for West Virginia. Anybody can call plays relatively successfully with a top notch QB at the controls, but a common denominator among the good coordinators is that they maximize the talent that they have. And that means for more than just one drive per game. Talent wise, Franks is the best QB Florida has had since Grier, and Nussmeier’s first game with him was worse from a pure play-calling standpoint than anything he called with Harris, Del Rio or Appleby. Continuing to drag along the notion that he and Malik Zaire are still locked in some sort of competition is silly, but that’s a story for another day (tomorrow, probably- but now we hopefully understand why I never wanted Florida to go after him).

Three, I’m terrified to ask where Florida goes from here. You can’t fire your offensive coordinator one game into a season, because if you do, you directly interfere with Feleipe Franks’ development and demonstrate a clear lack of coaching stability to recruits. And yet my patience with Nussmeier is growing very thin. The only remaining reason I’ve got right now to not fire him is Franks’ youth, and the comparison with Grier’s early moments. Grier really struggled against Kentucky and Tennessee- his first two games against Power Five conference teams- before putting it together against the Vols in the fourth quarter and then dominating Mississippi. The growth he demonstrated is enough to make me believe that Franks is capable of similar development, and if he does grow into a dependable starting quarterback, I believe in giving Nussmeier a fair opportunity to replicate the results he had with Grier- both as a play-caller and a QB developer.

Having said that, let me be completely transparent on my position here. Doug Nussmeier needs to show some major improvement, and then consistency, as a play-caller, and he needs to do so now. If Florida’s offense does not demonstrate clear and drastic improvement against Tennessee and Kentucky, Nussmeier will need to be shown the door. And if he is not, and the offense continues to struggle, it may be time to have a much more difficult conversation with ourselves regarding the direction of this program.

This loss, by itself, does nothing. Hypothetically speaking, Florida can win its next eleven games to reach the SEC Championship Game 11-1, and if they win that, they’re guaranteed to be in the Playoff. It’s the fact that this hypothetical appears to be so farfetched after the offense’s performance against Michigan that’s concerning, and the knowledge that if it happens again, there should and will be consequences.

3 thoughts on “Above all else, play-calling dooms Gators against Michigan”