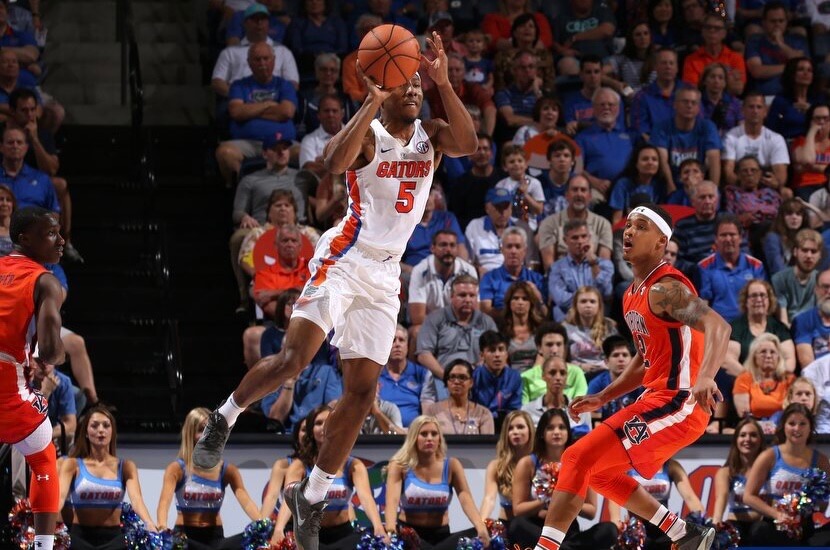 With another season of Gator basketball upon us, I thought it would be fun to mimic what I do prior to every football season: go game by game and project the Gators’ record.

So here we go.

Loss. The Seminoles have a nasty hex on the Gators on both the gridiron and the hardwood, and after last year I refuse to project Florida to beat FSU in either sport until they actually do it. With a lot to prove defensively, Florida won’t be able to stop Trent Forrest and Terance Mann in an ugly season opening defeat.

Florida will return home to lick its wounds and right the ship against the same school they used for this purpose to open the Dan Mullen era. The Bucs don’t pose nearly as serious a threat on offense as the Noles, and so the Gators will showcase their talent in a bounce back win.

La Salle isn’t nearly what it was when they went dancing a few years ago. Look for Florida to spread the floor and dominate inside against a team that’s even smaller than them.

The Sooners’ speed and athleticism will test the Gators on both ends of the floor. This will be a great test for the veterans like KeVaughn Allen and though they’ll come up short, they’ll provide something to be excited about.

Florida will bounce back in a big way from losing its opener in the Bahamas. Stanford doesn’t have the bodies down low to clean up the boards, and the Gators will cut down the trees in a preseason tournament for the second straight year.

The first of two games the Gators will play against Butler this season won’t go so well. A third game in as many days is the perfect recipe for one of the Gators’ patented shooting slumps, and Butler will do just enough offensively to eke it out.

Florida will return home and regain some confidence by blowing away a school they scheduled for exactly that purpose.

A prime time showdown with the Mountaineers in the Big Apple is exactly the kind of resume builder the Gators could use to make its NCAA Tournament case before the calendar even flips to 2019. But the patented “Press Virginia” blanket the Mountaineers will throw on the Gators will force enough mistakes to make the difference.

The Gators will get a second straight chance to prove itself in a high profile event. But the Spartans simply have too much firepower. Cassius Winston and Joshua Langford will have their way with Florida and the Gators’ record will dip below .500 in a competitive loss.

Florida will take its anger out on Mercer in a one sided affair to right the ship- and their record. Look for KeVaughn Allen to explode in this one.

This annual game in Sunrise is usually tricky for Florida. In the end, the Gators’ overall athletic advantage will power them through.

Round two of Florida-Butler will go the Gators’ way. An epic night from behind the arc will kick start a beatdown that will finally have this team feeling good about itself as conference play approaches.

The Gators never do play with any consistency against the Gamecocks. But this is the game that I’m pinpointing as the start of something special for Florida freshman Andrew Nembhard, who goes off on the Gamecocks en route to a convincing victory.

Something about playing in his home state seems to spur KeVaughn Allen on. He’ll make the most out of his third and final trip to the Ozarks and the Gators will lock down Daniel Gafford and withstand a late Hog surge for their first road win of the year.

Two straight wins to begin SEC play is as good of a precursor as any that a bad shooting night is coming. Florida will struggle from outside against a very good defensive team in Tennessee and falter at home.

The Gators will have some serious trouble in Starkvegas. Florida won’t shoot well in this one either, which will rightfully trigger some raised eyebrows, and they’ll have a difficult time stopping Quinndary Weatherspoon. Bulldogs grind this one out late.

Florida almost never wins in Athens, and now the Bulldogs seem to have a coach in Tom Crean who can take the program as high as it can go. The Gators are plenty talented enough to pull this out, but their history in Stegeman Coliseum doesn’t make it very wise to project them to actually do so.

After three straight losses, the Gators will finally put it all together for forty minutes. Nembhard, Allen and Hudson will look the way fans have hoped they would all along, and Kevarrius Hayes will play angry down low. The Aggies will push the Gators for awhile, but Florida will walk out with the win.

Florida will step out of conference and out of its region for a critical resume boosting opportunity in Fort Worth. And for awhile, the Gators will look like they’re going to take advantage of it. But Florida will go cold late and the Horned Frogs will steal this one in the final minutes.

Angered by its consistent inability to pull out the close games, the Gators will return home and smack Ole Miss upside the head. The Rebels won’t want to get in the way of Kevarrius Hayes in this game, and the Gators will shoot the lights out in an absolute curb stomping of the Rebels.

Nope. Kentucky is as loaded as they’ve been since they had Anthony Davis with guys like Reid Travis, Tyler Herro, and PJ Washington. The home crowd will help, but only so much. Kentucky cruises.

Buoyed by its upset over the Wildcats on its home floor, Florida will waltz into Auburn filled with the wrong type of confidence. Plus, the Gators have absolutely owned Auburn recently, beating them 21 of the last 22 times they’ve squared off. A bad shooting night is coming, though, and the Tigers will take advantage of it for a solid win of their own.

Another ugly shooting night (Florida seems to historically parcel them out in twos) will doom the Gators on the road in Knoxville, where they have had a long history of misery. Tennessee won’t do anything spectacular, but they’ll make enough shots to send Florida to its third straight loss.

The Gators will need this one badly if they want a realistic shot at dancing. With its season in a tailspin, Florida will come roaring back and claim a win over the Commodores as Nembhard shines.

It’s weird, Avery Johnson seems to only own Florida in Gainesville, but not in Tuscaloosa. That pattern will continue as Hudson drops an obscene amount of points on the Tide and the Gators finally get that first signature road win.

Due for a bad shooting night- it fits the pattern, after all- Florida will suffer another one in Baton Rouge. But this time, Hayes will bail the Gators out with an all time impressive night on the glass. Florida squeaks out a win in overtime and inches closer toward the NCAA Tournament.

Now on a bit of a hot streak, the Gators will return home feeling it and overcome a scrappy Missouri team. Hudson will again have himself a day as Florida struggles, but hangs on.

The Gators are due for a letdown after four straight wins, and it could very well come in Nashville. Memorial Coliseum is a weird place to play, and Mike White doesn’t seem to know how to beat Vanderbilt. But Florida will win this one on a late and-one conversion from Nembhard on a driving layup.

It would make absolutely no sense for Florida to lose this game. Georgia is likely to be the worst team in the SEC not named Vandy, and the Dawgs may even give the Dores a run for their money in that department. So because it wouldn’t make sense, naturally Florida will flirt with precisely that to happen. In a game far closer than it should be, Nembhard carries Florida again and seals it late.

I’m essentially projecting the Gators to have an overall rough season, but to peak at the right time. We’ll see more evidence of that as the Gators complete the two game regular season sweep of LSU, which will spark bellyaching from the Corndog fans that they would have beaten Florida at least once if the second game was moved to Baton Rouge.

Again: nope. The Gators will play tough, but Kentucky is bigger, faster and simply better than Florida in every aspect of the game. Cats smother Florida’s offense and roll at Rupp.

Daniel Gafford is going to have the game of his life against Florida in this one, just a random feeling. But KeVaughn Allen will bid farewell to his home state team with another 20+ point effort to finish his career 7-1 against the Razorbacks.

In a game it absolutely cannot afford to lose, Florida will score a season saving hat trick over LSU to reach the SEC quarterfinals. Thank freshmen Andrew Nembhard and Noah Locke for this one, as LSU will have already locked up a spot in the Big Dance and won’t care to provide a full forty minute fight.

The Gators will have locked up their spot in the NCAA Tournament with its trio of victories over LSU. Now they’ll go for their second victory over a set of Tigers in as many days. Mike White’s boys will be really feeling it now, and they’ll take Auburn down to the wire- but Jared Harper wins it for Auburn with a last second three.

Florida should have beaten Clemson last year in the Orange Bowl Classic. They’ll get a second chance in the opening round of the Big Dance. Elijah Thomas is going to be a handful for Kevarrius Hayes down low, but in a win or go home scenario, Florida’s veteran backcourt will make enough shots to score the upset.

Though four of five starters from last year are gone, Villanova will again have a veteran presence on its squad with Eric Paschall and Phil Booth. Jay Wright knows how to quickly rebuild a team, and even with so many key components from last year gone, the Wildcats will be a formidable opponent. But that won’t matter as the Gators again shoot the lights out  and book a stunning trip to the Sweet 16.

Duke is as talented as usual. RJ Barrett, Cam Reddish and Zion Williamson are three of the best freshmen in the country, and so what this matchup provides is a classic battle of youth vs. some experience and some more youth. The Gators’ impressive run through the East Regional bracket will come to an end against the Blue Devils, and will have to bid farewell to Hayes, Allen and Hudson, but the flashes that freshmen Nembhard and Noah Locke display through the year should provide enough confidence for Gator fans to feel at least some positivity about White after Year Four.

One thought on “2018-19 Gator basketball preview, game by game projections”